MUSIC! What purpose does it serve in our lives? How does it improve our physical, mental and spiritual state of existence? Well, I’ve always believed that music is the key to discovering the intricacies of one’s inner self, and expressing one’s connection and interaction with that which lies beyond. Music is the tongue of our soul, and indeed a means by which one’s mind, body and soul continue to co-exist in perfect harmony. So, what of its creators? Well, we should be grateful for their ingenuity in arranging notes in such a way so as to bring pleasant sound to our ears and warmth to our hearts and souls.

Alexander (Shoora) Mikhailian is one, such creator of music, and has managed throughout the course of his life, to touch the lives of many with his musical arrangements, especially those of the Assyrian folkloric nature. As per his own words,

“a firm and valid cornerstone of the folklore of every country is their local tunes and native songs.”

Shoora has devoted endless time and energy into livening up the Assyrian folklore spirit in the hearts of those privileged enough to have heard his tunes. 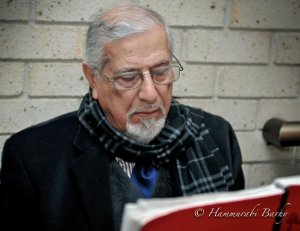 Both his ingenuity with the violin, and his leading role as the composer and conductor of numerous musical arrangements, including choral, instrumental and orchestral works, across many a country, have earned him honourable positions in his field as well as made him one of the most respected Assyrian musicians of our time.

The following article has been put together from written information on Mikhailian from various sources, as well as the information gathered by myself and Mr Anwar Atto from the two occasions of interviewing the Assyrian musician at his house on behalf of The Assyrian Australian Academic Society (TAAAS). On the second of these occasions, I found myself not only interviewing but also being entertained by Shoora’s marvelous talent with the violin as he played a few pieces of folk and classical music. I was amazed at the confidence, intense, emotion and technical expertise with which these tunes were strung. Shoora also played one of his own original compositions, ‘Qareeboota,’ on the piano, singing to the lyrics at the same time.

Entailed in this article is Mikhailian’s background; passion for music; musical aspirations; accomplishments during thirty years of musical life in Iran; accomplishments in the United States of America since 1980 – Nabouram; musical flair in Australia; style of practicing and teaching music; views on the future of Assyrian music and musicians; devotion to his Assyrian nation; and details of his musical compositions.

Use this form to find things you need